Loved Princess Diana in The Crown 4? Here are her 10 unforgettable fashion moments

As the release date of Season 4 of The Crown inches closer, we take a look back at Princess Diana's 10 most iconic looks that turned her into one of the greatest fashion icons of the 20th century.

It is not a secret that the popular OTT series, The Crown, has people obsessed with the British Royal family, their lives and the not-so-secret story behind the closed doors of Buckingham Palace. So, as the release date of Season 4 of The Crown inches closer, we take a journey back in time to look at one of the most intriguing and loved characters that will be introduced this time. If you have seen the new trailer, you know we are talking about none other than Princess Diana. The new season that releases on November 15 introduces the journey of the People's Princess.

Though Princess Diana's legacy extends far beyond fashion, like her humanitarian projects and her commitment to understanding about life-threatening diseases such as HIV, it cannot be ignored that she was probably the greatest fashion icon of the 20th century. So, it seems only fitting that we take a look at some of her most pivotal fashion moments, ahead of The Crown 4 premiere. Princess Diana and Prince Charles on their wedding day

Diana's fashion journey as a member of the Royal family is incomplete without the mention of her iconic, and OTT in all ways possible, gown that she wore for her wedding to Prince Charles in 1981 at the St Paul's Cathedral in London. The fairytale gown became a showstopping moment in the history of fashion and is still considered an iconic wedding dress from the last century.

An 80s puff-sleeve design constructed with lengths of silk-taffeta, the dress was created by David and Elizabeth Emanuel along with the bride herself. She wore an ivory silk taffeta and antique lace gown, with a 25-foot train - longest in Royal history - and a 153-yard tulle veil. It was adorned with 10,000 mother of pearl sequins sewed onto the bodice, sleeves and the veil.

Even her shoes were equally iconic. Diana, who was equal to Prince Charles's height, chose a satin and lace design that did not make her taller than her groom. It featured more than 500 sequins, over 100 seed pearls, and suede sole arches with a small C and D painted just under the heel with a heart between each initial.

Not just the dress, the wedding was iconic for several other reasons. An estimated 75 million people watched the televised event that was broadcast across 74 countries. In fact, Princess Diana was also the first Royal bride to omit the word "obey" from her vows. 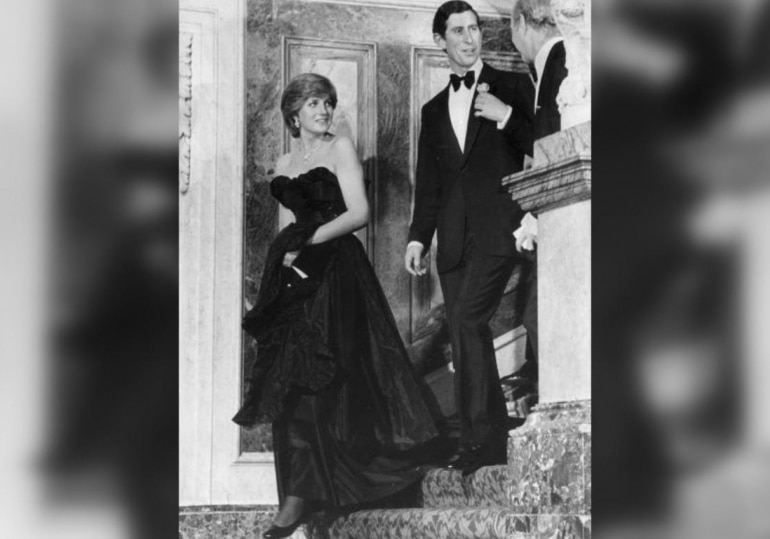 The gown that Diana wore to her first official public engagement with Prince Charles - a fundraising concert at Goldsmiths Hall in London - was also the ensemble that changed the public's opinion about her dramatically. It was the dress that gave her the name Lady Di and turned her, overnight, into a fashion icon from a quiet nursery teacher. Why, you ask?

Diana had opted for a strapless inky black taffeta dress featuring a ruffle trim and a dramatic train by The Emanuels, the same designers who created her wedding dress, for the occasion. The dress was never meant for Diana. She was meeting the designers for the fitting of her wedding gown when she saw this one. She instantly fell in love with it, and didn't care that someone else had already worn it.

Now, black is considered a colour for mourning and was not deemed fit for the occasion. Additionally, the form-fitting silhouette, shoulder-exposing and the plunging neckline was also not appreciated by many.

In fact, an excerpt from the book, Diana: Her True Story - In Her Own Words by Andrew Morton reveals that even Charles was not happy with it. When an excited Diana first visited him wearing the dress, apparently he had questioned her if she was going to wear the dress as black is for mourning. The book recalls that Diana thought that black was a smart colour and because she was not part of the Royal family yet, she told Charles she was going to wear it. However, it turned out to be a "horrendous occasion for her" and she was left so terrified throughout the evening that she nearly felt sick. 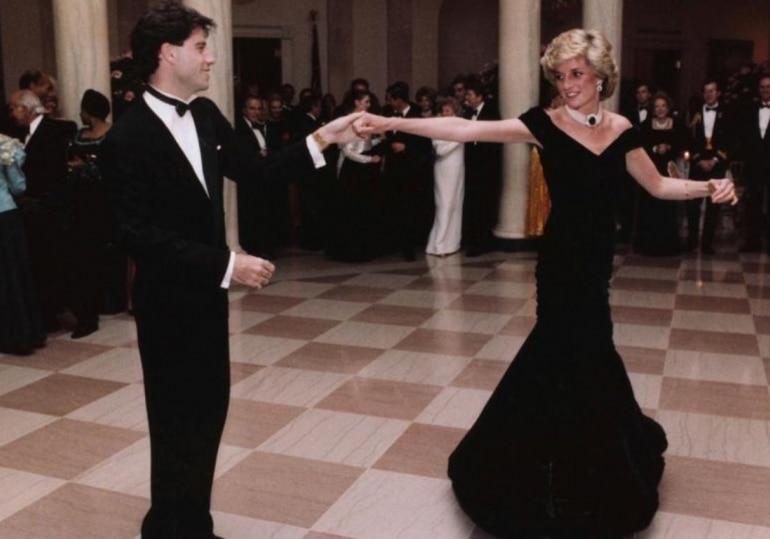 In November 1985, the Princess of Wales on her visit to an event at the White House wore a stunning off-shoulder midnight blue mermaid-style velvet dress by Victor Edelstein. She famously danced with John Travolta while wearing it and as a result, it came to be known as the Travolta Dress. The dress is said to be Diana's favourite as she wore it about eight times in public, making it one of her most worn dresses. The dress also marks a turning point in her fashion story, as she opted for timeless classic bodycon silhouettes, instead of romantic frills and ruffles of the 80s. Princess Diana in the iconic and infamous Revenge dress

A mapping of Princess Diana's fashion history is incomplete without the mention of the iconic and infamous Revenge dress. In June 1994, Diana stepped out for a gala at the Serpentine Gallery in London wearing a fitted black off-the-shoulder dress with an asymmetrical hemline and chiffon train with black sheer stockings, black pumps and an emerald pearl choker. She wore the dress the same night that Prince Charles confessed on national television that he had been unfaithful to her with his now-wife Camilla Parker-Bowles. Diana's statement was huge, and it was said without saying a word. 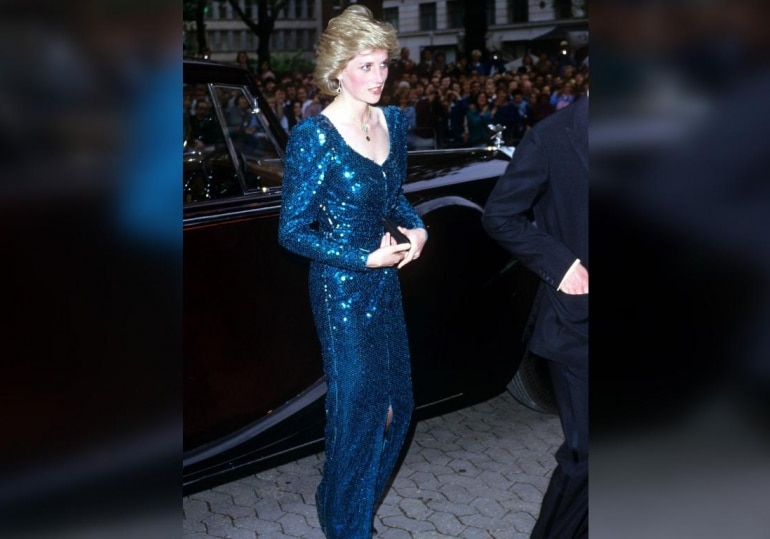 Princess Diana in a sequinned dress by Catherine Walker

To attend the Pink Diamond charity gala at the Royal Lancaster Hotel in 1990, Princess Diana had worn an iridescent sequinned dress by Catherine Walker. She wore this daring emerald sequinned dress with a plunging V-neckline and front knee-high slit not once but twice, first at a 1986 Austrian state visit and again at the 1990 Diamond Ball. Princess Diana at the Met Gala

It was Diana who showed the world that even a slip dress could be worn on a red carpet and that too at one of the biggest fashion events of the year - the Met Gala. She wore the Dior lingerie-style dress at the Met Gala in 1996 as a tribute to designer Christian Dior. She styled this unorthodox look with smart pumps, her favourite jewellery piece - the emerald choker necklace, dainty earrings and a diamond bracelet. 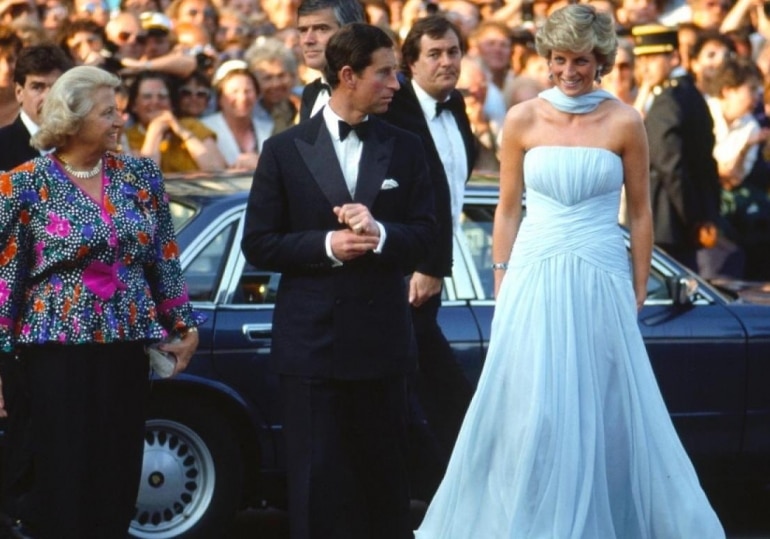 One of Princess Diana's most famous outfits is this gorgeous blue chiffon dress by Catherine Walker, which she wore to the Cannes Film Festival in 1987. It was reportedly meant as a homage to a gown Princess Grace of Monaco wore in Alfred Hitchcock's To Catch a Thief. Diana literally glowed in this simple yet oh-so-stunning strapless flowy gown. Another stunning choice of Diana that proves her sartorial prowess, is probably the white Catherine Walker embroidered dress she wore for the British Fashion Awards. She nicknamed this dress the 'Elvis dress' as it paid homage to Presley's trademark style with its upturned collar on the matching bolero jacket. The dress was adorned with 20,000 pearls. She also wore this ensemble for an official outing in Hong Kong in 1989. 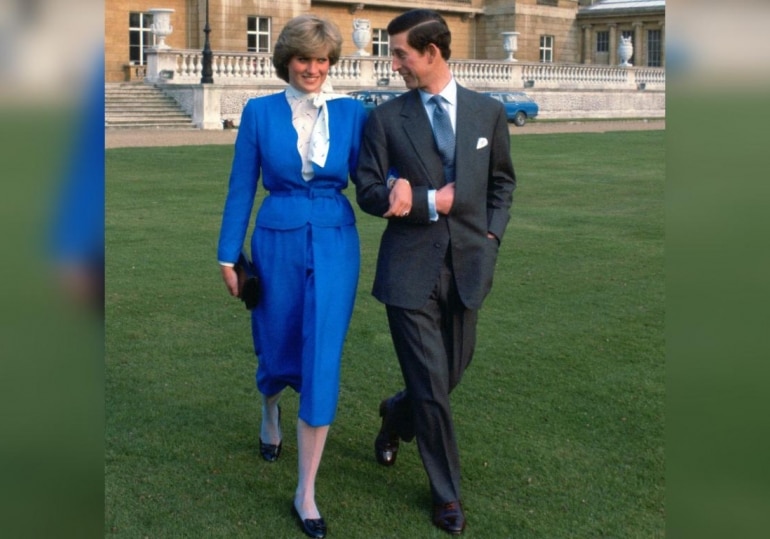 For the announcement of her engagement with Prince Charles, Diana wore a royal blue skirt suit, which, famously, she just purchased off the rack at Harrods, to complement her sapphire engagement ring. The simple yet chic suit became synonymous with her elegant sartorial choices through the years. In fact, wearing elegnat suits was one style statement that she never ditched throughout her fashion journey and even gave us some iconic tweed and satin silk suit looks that still inspire generations. Another look of Diana's that still remains iconic, not because of its OTT or glamorous side but because of its simple yet chic charm, is the one she donned to join Charles in Balmoral for a pre-honeymoon. She wore a brightly patterned jumper with corduroy trousers and Wellington boots, thus clubbing the rustic spirit of the Scottish lands and the dreamy spirit of the holidays. In fact, she single-handedly made Wellington boots cool, thus turning them into a fashion pick worn to this date.

Diana is undoubtedly one of the biggest and most influential fashion icons. These 10 looks, from the sea of her stunning public appearances, we hope we get to see on The Crown Season 4.