Fact Check: Were sweets dumped in the RJD office after Bihar poll verdict?

One of the pictures shows two men overturning a huge pot of sweets into a pit, and the other shows a few people standing near a food dump.

A set of two pictures started circulating on social media

The NDA emerged the winner, crossing the majority mark by a whisker, in a closely contested election in Bihar. This after most exit polls and early trends suggested a victory for the RJD-led Mahagathbandhan.

On social media, a set of two pictures started circulating with the claim that sweets brought to celebrate the election win were dumped at the RJD office after announcement of results. One of the pictures shows two men overturning a huge pot of sweets into a pit, and the other shows a few people standing near a food dump.

India Today Anti Fake News War Room (AFWA) has found the viral post to be misleading. These pictures from Haryana and Madhya Pradesh show government officials dumping spoiled sweets found during raids. The pictures have no connection to the Bihar election results.

Similar posts are also being shared on Facebook. Believing the claim to be true, many users criticised the RJD and suggested that the sweets could have been distributed among the poor. The archived version can be seen here.

Using reverse search, we found this picture in a news report by “Amar Ujala”, published on November 10.

As per the report, the chief minister’s flying squad, along with food department officials, dumped around one quintal spoiled sweets in Haryana’s Sirsa city. We found a similar picture in a report by ‘Jagran’ with the same piece of information. A video of the raid is also available on YouTube showing sweets being dumped in the pit. The YouTube video also says that the incident is from Sirsa.

AFWA found several news reports regarding this photo. As per “News 18”, the picture was taken in August 2019 when a food inspection team raided a sweet shop in Gwalior, Madhya Pradesh. The team found around 250 kg of spoiled sweets and later discarded them.

Similar reports were also published by “Dainik Bhaskar” and “Patrika” along with the viral picture.

AFWA further reached out to RJD spokesperson Mrityunjay Tiwari regarding the viral post. Tiwari also said that the claim along with the pictures is false. Therefore, it can be concluded that the viral post is misleading as the pictures are from Haryana and Madhya Pradesh where spoiled sweets found during raids were dumped by government officials. 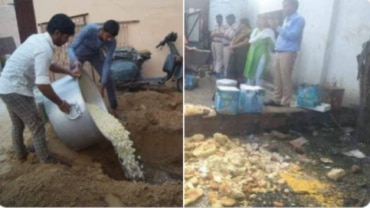 ClaimAfter the Bihar poll verdict, sweets were dumped at the RJD office in Patna. ConclusionThe pictures are from Haryana and Madhya Pradesh where government officials dumped spoiled sweets found in raids.

The number of crows determines the intensity of the lie.

Want to send us something for verification?
Please share it on our at 73 7000 7000
You can also send us an email at factcheck@intoday.com
Do You Like This Story? Awesome!
Now share the story